One of the features of a recent walk with my wife in our local Royal National Park (The Nasho) was that many of the birds we saw tended to be rather shy species which most walkers and cyclists would never see, even birdwatchers may have difficulty.  Even if it was only several birds it was enough to delight us both, since a feature of birding is that you are always surprized each time you go out, as you never know what you will get, epitomized in Forrest Gump’s mum’s box of chocolate analogy.  As we walked on this beautiful Summers day after a week of rain and cold winds, quite uncharacteristic of the time of year, we heard the classic catbird sound and looked up to get this unusually good footage in sunlight, of this most difficult rainforest bird.

We could see two of three Green Catbirds (an extremely shy and difficult bird to see amid the dark green canopy), loudly fleeing the opportunistic attack of a Pied Currawong which was pursuing the youngster in the family, leaving this one on watch. Eventually the Currawong left without a meal.

The Pied Currawong stealthily steals birds from many surrounding nests to feed its young, possibly taking at least 20 to 40 nestlings. It actually positions its nest after surveying the nesting population in a territory. As I have shown in previous posts they fight other Currawongs furiously for prime territories. The Second Edition of my current book features this bird as Opportunistic. That sneaky bright yellow eye will secretly peer at you waiting for the right opportunity to act.

As we walked on I could hear the call of a Sacred Kingfisher next to its arboreal white ant nest, which they use, along with Kookaburras to nest in. They can be difficult to spot when they are sitting in the shade along the river’s edge. We would not have noticed it high in the tree had it not been yapping with its advertising call.

As we passed the palm forest we are always hopeful for the return of the rarely seen and most difficult to photograph beautiful Rufous Fantail, but again not found there today.  But we did hear the melodic call of the Black-faced Monarch warning its mate which flew away.  This shy, elusive rainforest bird which is here during Summer months, normally keeps out of sight. It freely preened as it did not notice us some distance away.  Today we got some good views, rather than grainy shots hidden beneath dark canopies.

From the side of the track we saw a flash of red as a very small bird disappeared in among the grass, which we saw after much observation to be a Red-browed Finch feeding on grass seed. This flighty little bird remained for a short while as the flock fled.

Of course the Golden Whistler male came and made himself known. Usually he is shy and keeps away and the female curiously comes for a look, but she may be with her young or in the nest. As the male hunts down the odd insect for his nearby nestlings. He is easy to find when he calls during Spring and Summer, but very quiet and elusive during the non nesting Winter months.

As we reached the end of our walk for the day we turned to walk back and there hanging off a tree was a young Lace Monitor sunning itself. This huge reptile is seldom seen, and always scurries away when spotted. He saw we were there but did not move at all.

Here’s a close up of his face…

On our walk back we saw another fast elusive small bird, the Brown Gerygone, a couple of juveniles which had not long left the nest, so they tended to rest, allowing us to a photo moment,  more than their extremely active parents.

Of course the loud call of the White-throated Treecreeper is always a treat. The fun is in trying to locate the bird climbing the tree. It is so well camouflaged against the brown bark that most people hear the call of it ascending the tree, but never know where to look to find it. It is another mindful skill one gains over time. After reaching the top of the tree foraging for insects and grubs it flies to the foot of the next nearby tree and repeats the process.

As we walked on we saw this bird fly off under a bush several yards up ahead. I sensed from its profile it was the seldom sighted Wonga Pigeon, which puts out its loud monotonous call throughout the rainforest for hours at time. I managed to get this flash shot (I try to avoid flash photography with birds).

As many of you know, my wife often sends up a prayer during our walk asking our God if he has anything special to show us, which we are often rewarded with an unexpected bird sighting, and yes we did, we actually saw for the first time in over a year, one Rufous Fantail, which caused several passers bye to stop and enquire as they saw and heard our excited activity.  We tried desperately to catch a glimpse and photograph this fast moving elusive bird when it came out of the bush into sunlight. This is all we got of any value:

For this we were truly grateful to our gracious Father, for we had not seen this bird all winter and believe many hundreds of these birds were lost while nesting down south during the horrific bushfires last year and early this year.

Thankfully we have sighted two families since, residing here now, away from the burnt bush down south. Though we have not been able to get them in the light to photograph. So we rejoice that at least these have survived to breed.

Have a most enjoyable week despite the circumstances we all share at this time, some more affected than others. As we move into a new year it seems like the beginning of the last all over again, but for the absence of extreme heat and bushfires.

However,  one aspect to bear in mind is that ‘happiness’ depends on what is happening in current circumstances, where as joy is a much deeper more consistent attitude of one’s soul, which  exists regardless of the circumstances. This is an aspect dealt with more fully in my next book “Flight of a Fledgling”, and again is something we can learn from birds. We now know from recent research that many songbirds as well as communicating with their song, also sing for the pure joy of it as it gives them a feel good release as endorphins are released in their brains, in a similar way when we laugh, encourage people, do spontaneous acts of kindness and also when we sing. 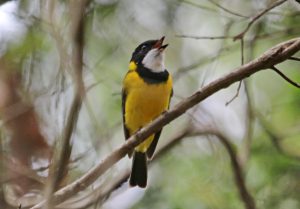 As mentioned on previous occasions, when we consistently choose to maintain a positive encouraging attitude of gratitude, we develop (hardwire into our personality) a joyous spirit or persona. This healthy state of mind and emotion actually improves overall health and longevity. To name a few, it improves our immune system, sleep, lowers stress, lowers blood pressure, releases feel good endorphins in the brain, endears us as a friend, makes us more creative and productive, enables us to better endure pain and misfortune, can maintain a more youthful appearance and make us feel more energetic. Smiling and laughter are part of this persona which also include the above benefits. The attitudes that work in reverse and are most unhealthy include unforgiveness, resentment, bitterness and unresolved anger. The greatest help that has been found to encourage a joyous state of being, is to have a firm and settled hope for the future through faith relationship  with God our Creator Father. The efforts of modernism, secular humanism and political correctness to remove God from our vocabulary and life has only served to heighten the confusion, fear, anxiety and uncertainty many are currently experiencing.

“A cheerful heart is good medicine [brings healing], but a crushed spirit dries up the bones.” – Proverbs 17:22 (NIV) –  from King Solomon one of the world’s wisest and most successful of men.

“And forgive us our debts, [in the same way as we have forgiven others] as we also have forgiven our debtors.”  – Matthew 6:12 – the reality and profundity of Jesus words is often missed when this prayer is repeated by rote. In other words a person will not feel or experience forgiveness from God through Jesus sacrifice on their behalf, if they refuse to forgive. Jesus explains in a parable that unforgiveness creates a prison of self torture. (see Matthew 18:34)

“I know that my redeemer lives, and that in the end he will stand on the earth.
And after my skin has been destroyed, yet in my flesh I will see God;
I myself will see him with my own eyes—I, and not another. How my heart yearns within me!” – Job 19:25-27 – a most remarkable man in history who tragically lost everything, and suffered great loss, even his health was afflicted,  but maintained his hope and faith and love, and later had everything restored to him in greater abundance than previously.

“Now faith is confidence in what we hope for and assurance about what we do not see.” – Hebrew 11:1

“Let us hold unswervingly to the hope we profess, for he who promised is faithful.” – Hebrews 10:23

‘To introduce people to our unique Australian birds,

‘So we can learn from them how to live a healthy and happy life.’

NOTE: All photos, videos and music used on this website are photographed, composed, performed  by the site owner and remains his copyrighted property, unless otherwise stated. The use of any material that is not original material of the site owner is duly acknowledged as such. © W. A. Hewson 2015, 2016, 2017, 2018, 2019, 2020.